review: The Price of Motherhood 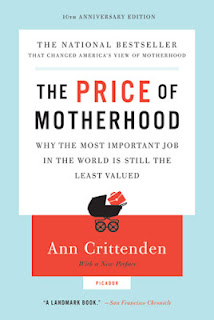 Much like buses, in this blog you could be waiting around for book reviews with none looming on the horizon (as in September) and then several come along all at one (as in October - November). Perhaps this says something about the time I have to devote to reading relatively lengthy books on feminism and motherhood, perhaps on how alert my brain is after a day’s paid and unpaid work. As my current reading material - Sarah Hrdy’s Mother Nature - is literally verging on encyclopaedic this might be the last review for a wee while.

Ann Crittenden’s The Price of Motherhood: Why the Most Important Job in the World is Still the Least Valued (2001) is one of the few books I have read - on any subject - that pretty much lives up to the hype on the cover: ‘a landmark book,’ ‘powerful and important’, and ‘a scathing indictment of policies that cheat mothers’. Naomi Wolf could do worse than have a squizz at this to get some tips on powerful ways to combine the personal and political (although, to be fair, I guess she probably has).  Unlike Kunin’s book, which I reviewed last week, Crittenden's book has a resonance beyond the borders of the United States. In the US, the institutional biases towards mothers may be writ large (in paid employment, in divorce, in single parenting, in tax rules), but they are present to some degree in other so-called developed countries as well. Not least in the ways at which the devaluing  - or, more accurately, the non-valuing - of a mother’s unpaid work institutionalises gender inequity and socio-economic disadvantage.

Crittenden’s book, reissued last year, is based on five years of research in economics, history, child development, family law, public policy, demography, anthropology, evolutionary psychology and on field interviews with a range of parents. It is also based on her own experiences of the acute disempowerment she felt on having children. She writes:

This is also a work of the heart, growing out of my own experiences as a professional woman and a mother. As a beneficiary of the women’s movement, for years I lived the unencumbered life of a journalist; one of the boys in a gender-neutral environment that represented enormous progress for women ... [A] surprise came when I realised [after having a baby] how little my former world seemed to understand, or care, about the complex reality I was discovering. The dominant culture  of which I had been a part considered child-rearing unskilled labor, if it considered child-rearing at all. And no-one was stating the obvious: if human abilities are the ultimate fount of economic progress, as many economists now agree, and if those abilities are nurtured (or stunted) in the early years, then mothers and other care-givers of the young are the most important producers in the economy. They do, literally, have the most important job in the world. (pp 10-11)

While I wonder just how ‘gender-neutral’ her previous work environment really was - it’s not like women without children don’t face any barriers in their careers - Crittenden’s outrage struck a chord. I read on, intrigued.

First of all, Crittenden traces the disappearance of women’s ‘work’ during the nineteenth century, as workplaces began to be increasingly located outside the home. So far, so obvious. What Crittenden also traces is attitudinal shifts and the specific locatable moments at which these seismic changes occurred. Around the middle of the nineteenth-century, for example, the developing national census began to classify the occupations of individuals within households rather than treating households as a single economic unit. As part of this shift, household labour (‘housekeeping’) was re-classified as ‘unproductive’ and separate from ‘productive labour’. Mothers ‘keeping house’ for their own families (unproductive) were distinguished from women keeping house for wages (productive).  This shift in the way a mother’s work was conceptualised meant that by the turn of the twentieth century, women and children were both considered as dependents or, more specifically, as economic liabilities rather than assets. Despite some differences, this trend manifested across the United States, in Britain and in Australia (and, I would guess, a number of other countries too).

And, in the 1920s, the gendered definitions of productivity became enshrined in international economic instruments, specifically in the measure that became known as Gross Domestic Product (GDP). Significantly, GDP only measured goods and services that were sold; by excluding ‘non-productive’ work from the national wealth ‘almost all the activities of married women were omitted from the scorecard of capitalism.’ (p 65). Crittenden does acknowledge that this has more recently begun to change, not least in terms of contemporary environmental problems (e.g. how do you calculate the value of clean water?), the insights of feminist economics, and a deeper understanding of what is called - a little chillingly, I think - human capital.

Crittenden cites with approval Marilyn Waring’s call to unpaid caregivers to tell census-takers that they are unpaid workers rather than ‘unemployed’; she traces how a campaign to do just that in Canada in the 1990s led to changes in the way unpaid labour in the home was counted in the census. During this campaign, Carol Lees, its principal organiser, encountered resistance from women’s groups who apparently did not agree with her child-care policy (which, according to her, is ‘to value it wherever it occurs, in or out of the home’ p 83). By the late 1990s, a number of countries had begun to collect data on unpaid labour. These shifts started to reveal the ‘free ride’ most societies were getting on the back of this unpaid work: ‘the entire society benefits from well-reared children, without sharing more than a fraction of the costs of producing them. And that free ride on female labor is enforced by every major institution, starting with the workplace’ (p 86). In neo-liberal economies particularly, children are thus seen as an individual ‘choice’ rather than a social good (much less a community responsibility). This rationale drives such practices as expensive child care of variable quality, limited financial benefits for families, a demonise-the-parents approach to all manner of anti-social behaviours, and humiliating reckonings of what a wife is worth in divorce settlements (including child support payments). Cue a thousand comedy routines concerning blood-sucking former spouses...

She closes her analysis by setting out a programme for business, government, and the community, the ‘free riders’ on mothers’ unpaid labour who reap the benefits from well-nurtured children while contributing little to the cost.

Throughout the book, Crittenden doesn’t shy away from the fact that some early feminists bought into the productive / unproductive distinction and played a role in the perpetuation of inequity: she documents a 1909 debate between Charlotte Perkins Gilman (who described the vast majority of women as ‘unproductive parasites’) and Anna Howard Shaw (who argued that a mother’s role in the home should be compensated), as marking a crucial turning point in the US feminist agenda. Gilman, she argues, saw the shift in women’s status as requiring the overthrow of the patriarchal family as an economic unit to emancipate women, revealing some degree of contempt for the way in which a number of her contemporaries actually spent their time.

As that evening in New York illustrated, at the turn of the twentieth century, the women’s movement contained two contradictory strands: one that denigrated women’s role within the family, and one that demanded recognition and remuneration for it .... For the rest of the twentieth century, the women’s movement followed the first path, and it led to innumerable great victories. But in choosing that  path, many women’s advocates accepted the continued devaluation of motherhood, thereby guaranteeing that feminism would not resonate with millions of wives and mothers. (p 63)

I’m usually a little suspicious of sweeping statements, but it’s nonetheless hard to escape Crittenden’s conclusion. It bristles behind every cry of outrage from previously career-minded new mothers (‘why didn’t anyone tell me?’), some of which are either overtly or covertly contained in the recent outpourings of ‘mummy-literature’: from the sardonic critiques of coffee-groups, to the more personal memoir, to the political polemic, to the historical analysis of motherhood as institution, to the exposition of ‘natural’ motherhood, to the mummy blog. It’s hard not to read it into the statistic of approximately 30 per cent of well-educated middle class women in ‘developed’ countries who are apparently choosing the ‘nuclear option’ of not having children. It’s hard not to read it into the so-called mummy wars between ‘stay-at-home’ and working mothers. It’s hard not to read it in the failure of most governments to provide adequate support for families particularly in early childhood, and in businesses who bemoan family-friendly policies.  It’s hard not to read it in the overwhelming evidence - which Crittenden assembles in subsequent chapters - that those who look after children are not only poorly paid but lack status, have limited political clout, and pay plenty for their ‘labours of love’.

Isn’t it time that governments, businesses, and communities started sharing more of the costs of raising a child, instead of just reaping the benefits?