'to help the mothers and save the babies' 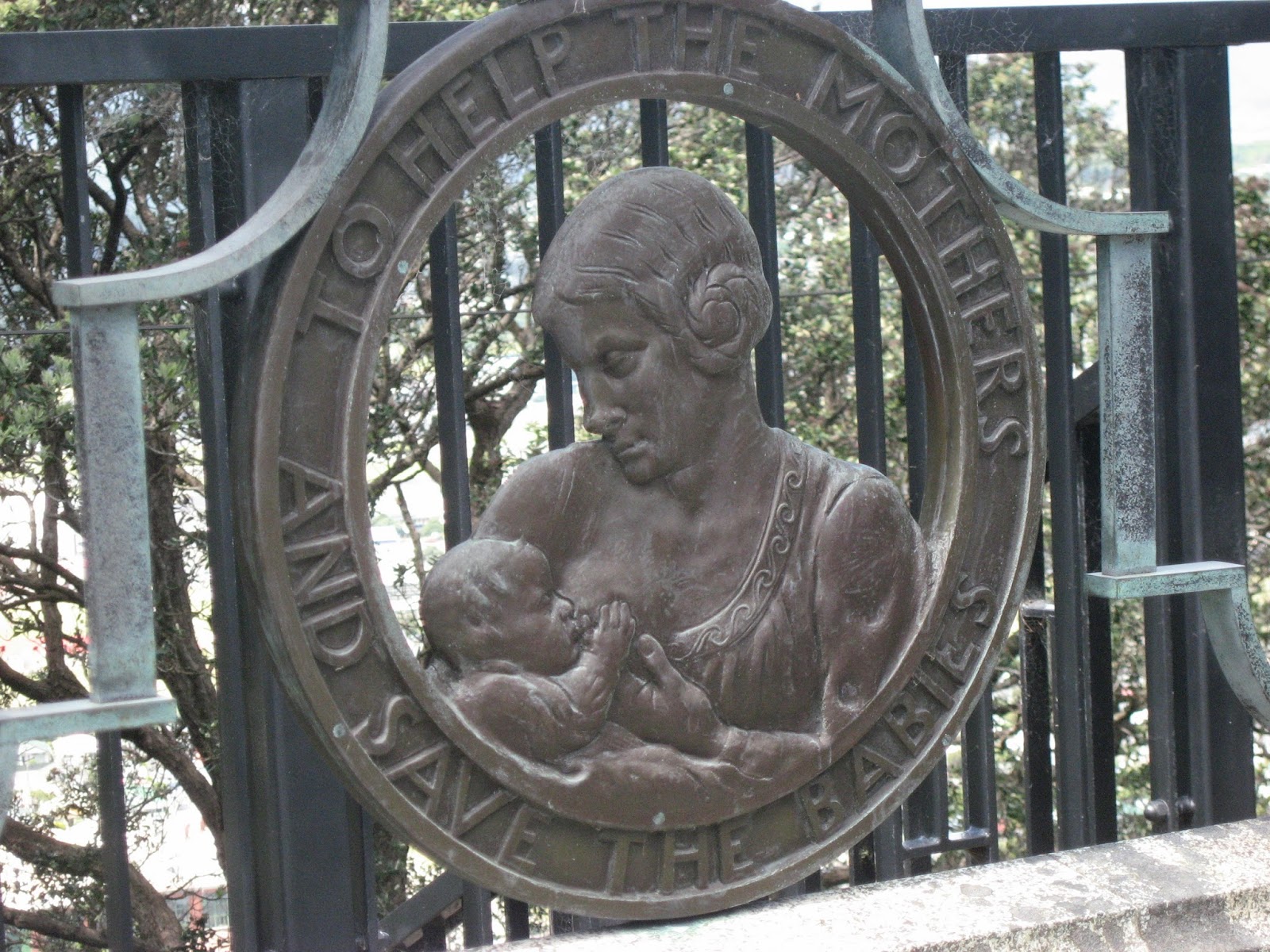 I think Plunket, who provide free well child checks for New Zealand babies, have decided I am a woman on the verge.  Due to my sleep-deprived state, they have decided that I need help ... presumably in order to save my baby too.
‘To help the mothers and save the babies’ was the official motto of the Royal New Zealand Plunket Society, founded in 1907 to address the high rate of infant mortality by Sir Frederic Truby King. The motto is engraved on a plaque by his mausoleum in Wellington (see picture), alongside his old house and garden and the remainder of the Karitane formula factory.
Although his training and experience was primarily in pyschiatric care (interestingly, he visited the feted French neurologist Jean-Martin Charcot, who was famous for his treatment of female ‘hysterics’), Truby King was one of the key proponents of a scientific approach to child-rearing, one which had the effect of divesting mothers of their instincts.  As Linda Bryder comments in A Voice for Mothers: the Plunket Society and Infant Welfare 1907-2000, ‘mothers were ignorant of the correct methods of child-rearing and needed to be educated’ (p ix). Initially, Plunket focussed its efforts on Paakehaa or white women, who were required to produce children to do their patriotic duty for race, nation and empire. (Seriously. Sue Kedgley documents this in Mum’s the Word). It grew and thrived in New Zealand due to the support and voluntary work of a number of women, including the ubiquitous Plunket nurse.
While Truby King himself advocated breastfeeding, his methods were interpreted in the form of rigid rules about scheduled feeds and deeply strange ideas about when and how babies should be breastfed that basically meant that many women were not able to get breastfeeding established. In Mum’s the Word, Sue Kedgley notes that following the normalisation of hospitalised births in the early twentieth century, women were told to only breastfeed their babies for two minutes for the first few days, not to feed at night, and to delay the first feeds (p 89). Once home, mothers were ‘handed over’ to Plunket nurses who visited them at home and provided advice and support (not much change there, then).
While Kedgley is careful to note that many of the mothers found this support invaluable - and we’re talking principally of Paakehaa mothers here - some felt they were being monitored and found wanting. Mothers were encouraged not to ‘spoil’ babies, leave them to cry, and to establish routines for their days and nights. Plenty of mothers ignored this advice, while others twisted themselves inside out to follow it religiously. This regime enabled the government in 1924 to report that it, in conjunction with Plunket, had gone ‘a long way towards ensuring a uniform, authoritative advice in regard to matters bearing on family life, and the rearing and treatment of children in health and disease.’ Kedgley observes that, by 1927, with approximately two thirds of babies  under its care, ‘the government was able, through the Plunket society, to effectively control how Pakeha babies were brought up.’ (p 90)
It is somewhat ironic that as well as ditching the patronising motto (I mean who are the babies to be saved from? Their mothers? The redemptive religious tone in the phrase is also striking), Plunket now advocates ‘breast is best’ and to feed newborn babies on demand. The Plunket society is now complemented by a range of health organisations who also offer well child / tamariki ora services, so it no longer has a monopoly on infant care. This is reflected in its funding, which is forlornly trumpeted as a ‘unique three-way partnership’ between business, the community and government. Or, in other words, they are expected to carry out the functions of the modern surveillance state, without adequate funding to do so.
This walk down the path of history has caused me to reflect that while Plunket is, in general, a more benign and less rigid institution than it was for much of the twentieth century, several similarities remain, not least in its monitoring and compliance function. Although our Plunket nurse is personally quite nice, I’ve noted every single time that she has ‘ticked off' my responses to her questions in a lengthy form: tick for exclusive breast-feeding, cross for sleeping through the night. My individual responses will be crunched down to produce a range of collective statistics that indicate how well or poorly New Zealand mothers are ‘performing’ at this thing called mothering. It gets my back up everytime I notice it, and I am tempted to lie just to be perverse.
The uniform and authoritative approach to childcare has not quite died a death either. These things I have been told by various Plunket nurses, either in person or via Plunketline, wouldn’t have been so out of place in the last century:


Very seldom have I been encouraged to trust my own ‘instincts’.  And, while they note that my baby is healthy and happy, very rarely has anyone said ‘you’re doing well, especially given what you’re dealing with at the moment.’
But are ‘instincts’ a reliable guide either? Recently, I have blogged about the extreme sleep-deprivation we’ve been experiencing and my instincts tell me that my baby, who barely six weeks ago was sleeping through the night (aah, bliss) doesn’t now need food every one to two hours in the night. But that logical belief is pretty hard to communicate to an inconsolable baby in the wee hours of the morning. And so I feed her. Because it works.
I must’ve seemed like a zombie when I reported this to the Plunket nurse at a recent visit, because she set various processes in motion to provide support to us: a visit from a Karitane nurse to offer advice on sleep training, a food-run from a charity called Bellyful who supply free food to parents of newborn, young or sick babies, and also strongly encouraged me to contact the Post-natal distress support line.
All of which showed concern and did offer some help and I hasten to add that I’m not ungrateful. We’ve managed to improve the night waking, but it’s still not great. To which, I guess, Plunket could say ‘they’ve helped this mother and saved her baby.’ Or, to be more paranoid, have they just ticked a box to say support was provided and they can therefore wash their hands if anything goes badly wrong now?
Yeah, we don’t have much additional support. Yeah, we’re not getting enough sleep at the moment. Yeah, we’re not doing everything perfectly. But it doesn’t necessarily follow that I’m a woman on the verge.
It does mean that looking after a young baby is hard, unpredictable and challenging on just about every level. Perhaps the most helpful thing that I’ve learned in the last few weeks was not from Plunket. And that is to try and let go, to give up the illusion of control, and to not resist the idea that the baby will wake in the night. Just because I think she shouldn’t doesn’t mean she won’t.
The most supportive comments have come from another mother whose baby doesn’t sleep through the night either. Instead of telling me what to do or try, she simply said “I hear you! Some babies just don’t sleep’ and ‘Sleep will come back. All will be forgiven.’


Sometimes being heard is better than being 'helped'.
Posted by Judith Pryor at 7:53 PM