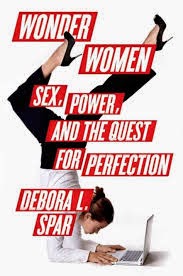 Given how much time I have for reading at the moment, let alone writing about what I’m reading, I think book reviews may be few and far between in my posts this year. Seeing, however, as I did manage to read the not very long and articulately written Wonder Women: Sex, Power and the Quest for Perfection (2013) by Debora L. Spar, I thought I may as well review it.

But not because it has anything very groundbreaking to offer, I’m sorry to say.

What is it about books that reference the fabulous Wonder Woman in the title that leave me cold? The last one I reviewed - by Australian journalist Virginia Haussegger - was also disappointing and often for similar reasons as Spar’s.

Like a number of high-profile American women writers - I’m thinking particularly of Anne-Marie Slaughter and Sheryl Sandberg here - Spar is concerned with the idea of ‘having it all.’ I don’t know why I get suckered into reading these books - maybe because I live in the hope that there might be a high-profile, best-selling book informed by feminism that offers a bit more to their wide readership than stories about the author and her friends.

Spar is the president of all-female Barnard College in the US, having moved there from a professorship at the male-dominated Harvard Business School - and some of the most interesting parts of the book are her comparisons between the two elite institutions and their different gendered styles and discourses (comparisons prefaced to the point of parody with ‘not better, not worse, just different.’) I was particularly interested in her accounts of decision-making styles, and mentoring students, as well as the ‘controversy’ over President Obama giving the commencement address at Barnard (‘why would he waste his time talking to a bunch of girls?!”) These could’ve have opened the way for a more specific and nuanced analysis of the way gender operates in higher education in the United States.

Sadly, these anecdotes were almost buried in her much more generalised main focus on beauty, love, sex, motherhood, housework and aging. Not that these topics aren’t important - and the section on aging was particularly interesting - but, given her background in government, business and economics, she could’ve also drawn on feminist research in these areas to look at the broader picture for women.

Like Haussegger - and also Sandberg and, to a degree, Slaughter - the main problem with Spar’s book is its assumptions. It starts from the individual but fails to ‘connect the dots’ and see how individuals are constituted as subjects within the culture in which they live. She does go one better than Haussegger, however, and uses the word ‘patriarchy’ all of once in the book. No other similar term for systemic gender and sexual inequality - institutional sexism, indirect discrimination, structural discrimination, or even rape culture - is used in the book. In fact, while the book looks at internalised violence - such as eating disorders (Spar is an anorexia survivor and writes poignantly about what drove her to this: the quest for perfection of the book’s subtitle) - it barely touches on violence against women, rape culture, sexual harassment and discrimination on the basis of sex.

Spar’s thesis then is that her generation of women have sacrificed themselves on the altar of perfection thanks to three main sources: their mothers (of course! for having expectations that their daughters will have careers as well as families), the media (about which there is actually very little critique), and ‘the feminists’ (not feminists, or feminism, or even named women with a feminist agenda, but ‘the feminists’ - there’s a distancing phrase if I ever I saw one!) (pp16-20).

Despite the mention of ‘power’ in the book’s subtitle there is very little analysis of the way power is created and disseminated. For Spar, power simply seems to mean ‘being in power’, and her answer appears to be for career-focussed women to join the echelons of power and transform it from within. But if you only understand power as a construction of consciously rational individuals then the only way you can make sense of inequality is by resorting to the level of crude conspiracy theory: a bunch of rich white guys get together and plot to keep everyone else in the entire world under their thumb. Sure, this might be the effect of patriarchy and/or capitalism and/or white supremicist culture but it’s not really how it works nor why it persists.

The other thing that irked me was her attitude towards feminism.  She is at pains to point out at the beginning of the book that, even as she became highly educated and took on high-powered jobs, she actively distanced herself from ‘hairy-legged feminism’ (aargh - self-hating cliche alert!). Now that she’s older and wiser, and has tried to balance the main competing demands of being female (i.e. having a career and having kids), she’s begun to see that feminism might in fact have lots of interesting things to say about her experiences.

Her book then quotes from feminist research, gives a potted history of key moments in white Western feminism, and provides pithy epigrams from Simone de Beauvoir’s The Second Sex as well as Tina Fey’s Bossypants. She writes that her book espouses a ‘revised and somewhat reluctant feminism,’ a ‘softer and gentler form’ that isn’t so invested in proving women’s equality and quits blaming men. And despite her book’s avowed interest in power, she actively says she’s not interested in ‘examining the power hierarchies that undeniably still separate men from women’ but rather in ‘practical issues’ (pp 10-11).

Is it just me or does she not really get what ‘the feminists’ have been not shaving their legs to tackle? What is the ‘softer, gentler’ feminism meant not to threaten? And as for not blaming men (yawn) see my previous comments about patriarchal structures. The quest for equality is not so much about proving that women can do what men can do, but dismantling the structures and systems that disempower women: substantive equality. I don’t know what’s ‘impractical’ about that.

Genuinely empowering women to be leaders in their communities is undoubtedly transformational, as numerous commentators including Marilyn Waring, Amartya Sen and even Sheryl Sandberg have pointed out. The crucial point, however, is in what leadership means. Spar et al seems to understand leadership as a means for top-down transformation within existing power structures, while for others it means grassroots action, self-determination or changing the nature of power itself.

In short, I’m kind of bored with these ‘can we have it all?’ books. Nobody has it all. Creating the desire to ‘have it all’ is part of the ideology of capitalism not feminism. I’d like to hear more from women who are less concerned about buying into this mythology - even if it to critique it. Today, for example, I read about research on the experiences of young Maaori and migrant women in New Zealand maternity services and the biases, barriers and stigmatisation they faced in accessing those services.

At the risk of sounding like a conspiracy theorist myself, could it be that commercial publishers have much more of a vested interest in selling books that trade in desire and fantasy rather than changing the world?
Posted by Judith Pryor at 3:49 AM