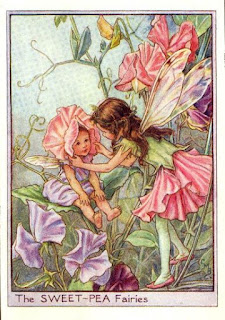 This morning, the baby - or the toddler, as I should henceforth call her - made a beeline for her one pink top and insisted on putting it on. ‘Oh dear,’ I thought, trying my best not to make it seem like a big deal. ‘It’s started. She’s about to cheerfully undo all my attempts to give her a life in technicolour.’ Teenagers with a penchant for black have nothing on the monochromatic world little girls are encouraged to inhabit these days.

On the way to the supermarket, we stopped at a second-hand toy and book sale. The community hall was bursting at the seams: parents tried to stop their kids running off with toys before they’d paid for them, kids tried to wheedle their parents into just one more toy, and everyone frowned at those foolish enough to wheel strollers through the narrow lanes either side of the trestle tables. Wading through this sea of humanity, toddler long since abandoned somewhere behind me, I couldn’t help but notice by the meerest of glances which stalls had stuff for girls and which didn’t. Three guesses how I managed this feat of deduction? Yep, they contained items that were predominantly pink and glittery. There were pink dolls-houses and wands. Pink tea-sets and vacuum cleaners. Pink phones and tiaras. Gender-stereotyping, what’s that?!

I finally found a table that mainly sold books and started thumbing through them. One box was full of ‘girls’ books’.  Without exception, every one was about fairies or princesses or fairy princesses. I felt depressed and, remembering the pink shirt preference of the morning, a little worried. Of course, no-one was forcing me to buy these books, but the fact that there were so many of them all together, clearly intended for another little girl just to love really bothered me.

It was not always the case that books aimed at little girls so blatantly inhabited the role of fantasy (and not the Tolkien-kind either). ‘When I was a kid’, to wheel out a hackneyed phrase, stories for girls seemed to be dominated by horses and ballet. If you had two X chromosones, you were apparently pre-programmed to dream of Follyfoot or Sadler's Wells. Of course, these were manufactured gender preferences too, but at least they were a bit more real and, more importantly, active. The girls in them had to work hard to succeed at their dreams, they had to do stuff in order to try and be successful - and they didn’t always succeed either.

Now, it may well be the case that these fairy princess stories are about the one fairy princess who rebels against her royal fairy upbringing and redefines what it means to be a fairy princess - I feel ridiculous even writing that - but, here's my issue, why are they fairy princesses at all? Can’t a girl be rebellious or ambitious or whatever other defence is usually given for stuff like this without first being represented as either an ephemeral imaginary creature or an ephemeral technically-real-but-totally-Disneyfied-to-the-point-of-unreality creature?

I’m starting to get worked up again just thinking about it.

You may well think, ‘where’s the harm’?  It’s only toys and books, no-one’s forcing you to buy them, and your daughter may well totally love these kinds of books when she gets older and then what will you do? And, anyway, it’s it only natural for little girls to like this stuff?

Recent research by neuroscientists such as Cordelia Fine and Lise Eliot has shown that there are some small sex differences in children’s brains, but that they are not as great nor as 'hardwired' as we are led to believe. Eliot, for example, found after an exhaustive search that there was ‘surprisingly little solid evidence of sex differences in children’s brains.’ In fact, she found only two that had been reliably proven: boys‘ brains are larger than girls by around 8 to 11 per cent, and that this difference shows up around the onset of puberty when girls‘ brains finish growing about one to two years earlier than boys’.  Before the jokes start coming, she considers this difference to be on a par with boys‘ greater height and weight at birth and in adulthood (Pink Brain, Blue Brain, p 5).

So little girls aren’t pre-progammed to like fairy princesses after all? Woohoo! But then why do so many of them seem to gravitate towards it?

The obvious answer is money. Pink items are aggressively marketed at young girls who then use their pester power to wear down even the most intransigent of parents. How cunningly simple to gender everything so parents will have to shell out twice if they have children of each sex. In Cinderella Ate My Daughter, journalist Peggy Orenstein describes the sheer magnitude of gendered merchandise on offer:

The annual toy fair at New York's Javits Center is the industry's largest trade show, with 100,000 products spread over 350,000ft of exhibition space. And I swear, at least 75,000 of those items were pink. I lost count of the myriad pink wands and crowns (feathered, sequined and otherwise bedazzled) and infinite permutations of pink poodles in purses. The Disney Princesses reigned over a new pink royal interactive kitchen with accompanying pink royal appliances and pink royal pot-and-pan sets (though I would have thought one of the perks of monarchy would be that someone else did the cooking). There were pink dinnerware sets emblazoned with the word princess, pink fun-fur stoles and boas, pink golf clubs, sleds, tricycles, bicycles, scooters, and motorcycles and even a pink tractor. Oh, and one pink neon bar sign flashing "live nudes" .... "Is all this pink really necessary?" I asked a bored-looking sales rep hawking something called Cast and Paint Princess Party. "Only if you want to make money," he said, chuckling. (Read more here)
Fine, but I’ve also seen plenty of hand-knitted, hand-carved and hand-painted things to think that this isn’t only about the dollar. It seems a bit of a coincidence that the profusion of pink fairy princess products exploded in the 1980s, around ... oh ... the same time as mainstream culture mounted a backlash against second-wave feminism (detailed magnificently by Susan Faludi in Backlash: the Undeclared War Against Women way back in 1991 and, more recently, picked up in respect of the ideology of intensive mothering in Douglas and Michaels’ The Mommy Myth).
Eliot’s research offers insight here too. Her main field of study is plasticity, which is premised on the fact that the brain actually changes in response to its environment:

Simply put, your brain is what you do with it ... Learning and practice rewire the human brain, and considering the very different ways boys and girls spend their time while growing up, as well as the special potency of early experience in moulding neuronal connections, it would be shocking if the two sexes’ brains didn’t work differently by the time they were adults. So it’s all biology, whether the cause is nature or nurture (Pink Brain, Blue Brain, p 6).

Putting on my best conspiracy theory hat, I can’t help but think then that there’s something going on when little girls are being bombarded with fairy princesses and pink irons and glittery plastic high heels with precious little else to relieve it. Namely, that patriarchy is insidiously working to disempower women from birth. And when people shrug and say it doesn’t matter, or it’s only natural, it’s sending a message loud and clear - whether it’s meant intentionally or not - that this is what little girls should like and be like. And, that one day, not too far away, this is what they will as women become (well, not actual fairy princesses, but you get the idea). Pinkification of girls can also be considered potentially damaging to little boys as well, as it defines extremely narrow notions of femininity and the ways in which girls and women should be treated because that’s what they like / are like.

And yet ... what about agency? After all, nobody has to totally follow the cultural script that is written for them, and that applies to both parents and children.

As with most things these days, my toddler is showing me the way. She may have opted for a pink t-shirt this morning (maybe she was sick of getting mistaken for a boy too), but once we got to the sale she made a bee-line for the first thing that grabbed her attention: a blue wind-up car.

Maybe we’ve got a little while to go yet before Cinderella comes knocking.
Posted by Judith Pryor at 5:09 PM