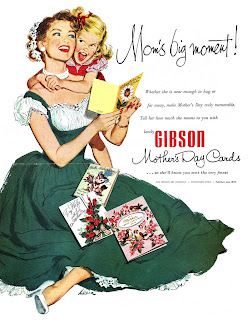 It’s that time of year again: the day when care, compromise, sacrifice and love are reduced to sentimentalism and cliched tokens of appreciation. It might not come as much of a surprise to learn that Mothers’ Day, as conventionally defined, kind of makes me cringe.

Before I became a mother, I found the idea that families’ emotions were manipulated for commercial gain somewhat cynical (which is not to say that I neglected my mother on Mothers’ Day - I’m not totally heartless!). After becoming a mother myself, I’ve become even more troubled by it (although gifts and general spoiling will be appreciatively received). What troubles me now is less the tokens of gratitude and sweet home-made cards - there are, of course, many ways to show appreciation without lining the pockets of florists and confectioners - than what I see as the sentimental notions of motherhood being peddled to justify it all.

I personally find these notions constricting because I don’t think having a baby made me less able to work and make a significant contribution in my chosen career (especially when compared with my imputed ability to do laundry and make apple pie). Nor do I think it made me less able to see that many of the systemic inequalities that women experience are closely linked to becoming mothers and raising children. Nor did it cause me to forget that becoming a mother nearly caused me to lose my life. While there are plenty of positive moments to offset this, motherhood is a also a serious business and, to me, luxury soaps don’t quite do justice to it.

Last year, I wrote about the history of the Mothers Day celebrated in New Zealand and some other western countries as a day which began as rallying call for pacificism in the context of the US Civil War. It was soon transformed into a paean to the cult of domesticity (y’know like ‘I love you mum, because you wash my socks’).  I also wrote a little about an international campaign aimed at decreasing maternal mortality around the world. For some women, becoming a Mama is much less about booties and bassinets than life and death. In 2008, for example, Oxfam estimated that half a million women die in childbirth each year. This year, the Huffington Post similarly profiled a range of global issues affecting mothers and encouraged people to donate to charities that support families to survive and thrive.

And then I came across a series of stories that caused me to re-think how I see Mothers Day.

This week, while reading one of my favourite blogs, I came across this Mama’s Day campaign targeting immigration reform in the USA, a part of the Stronger Families initiative. As part of their campaign aimed at encouraging decision-makers to rethink discriminatory polices that cause immense hardship to women and their children, Stronger Families is running a blog carnival in which bloggers from a range of different viewpoints share what motherhood and mothers mean to them. The posts address mothering from many different subject positions, including gender and gender identity, sexual orientation, class, immigration status, (dis) ability, and age. They are well worth a read to not only counteract the sugary narratives often presented in the mainstream media, but also as a reminder that one’s own story and way of being is not the only one, that families do not always equally enjoy their human rights. I was particularly affected by this story, this one and this one.

On a different website, this story from a lesbian parent reminded me that while I might cringe about Mothers' Day, others celebrate the hard-won privilege of being able to be included in the narrative of the day. In turn, it reminded me of the story which New Zealand MP Louisa Wall told during her speech for the third and final reading of the Marriage Equality Bill. Wall’s story told of a lesbian mother whose partner had to have her name struck off her daughter’s birth certificate when she died, because only one person in a gay couple could be recognised as a parent or guardian. The law change now allows for both people in a gay couple to be legally recognised as a parent of an adopted child (see Wall’s speech in full here). Elsewhere, Michelle Obama's self-description as a Mom-in-chief has been interpreted as a revolutionary act for African-American women.

These stories reminded me that some groups of women have been denied the privilege of sharing in the narrative of socially sanctioned - and sanctified - motherhood. What makes me cringe about Mothers’ Day are the constraints it imposes on women like me who occupy a position of relative privilege - e.g. white, middle class, in a heterosexual relationship socially- sanctioned by marriage - but that this position is one not universally shared by all mothers. Many of these mothers continue to fight for their recognition as mothers, and for the legitimacy of their ways of mothering, as these Indigenous women do. Hearing the stories of women who do not share the privileges I do reminds me that we still have a long way to go to see mothers as fully-rounded people managing different pressures, desires and needs, and to support them accordingly.

Perhaps, after all, Mothers’ Day is a good day to reflect on re-evaluating and re-valuing what motherhood means.