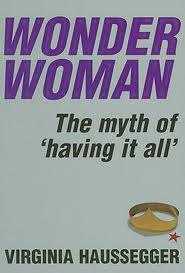 Unfortunately, this is not a review of the comic, film or TV series of Wonder Woman, the feminist super-hero, but a review of Australian journalist Virginia Haussegger’s 2005 book Wonder Woman: The myth of ‘having it all’.

Its starting point is a provocative and visceral article entitled 'The Sins of our Feminist Mothers' Haussegger wrote for The Age in 2002. In it, she bared her soul about the recent and devastating discovery in her late 30s that she was not able to have children. Her article went further, questioning whether feminism has sold women a myth: that despite its important gains, it had made women like her believe that they could ‘have it all,’ when in fact they might really have to choose between career success or children.

This book grew out of the huge reaction, both positive and negative, to that article:

That sense of being sold ‘a crock’ was a common theme in the outpourings. What fascinated me about many of these letters, emails and commentaries was that it seemed no matter where a woman stood, be she mother, mother-to-be or non-mother, something was wrong. It was as if a scabby old scar had been ripped off a festering wound. (p 25)

Haussegger clearly intends her book to be a Betty Friedan-esque expose of a kind of modern-day ‘problem with no name’ (p 289). She tries to connect her own experience with that of the women who responded to her article - both the mothers who felt short-changed by the experience of motherhood (whether finding out having kids was not all it was cracked up to be or missing out on career opportunities) and the women who did not have children (whether the ‘child-free' women who adamantly insisted on their right not to breed, or women who did not have children for one reason or another).

On the positive side, the personal stories that Haussegger recounts in the book are incredibly moving, and her ability to connect with the women telling them is certainly part of that. Reading about Carolyn, a woman who struggled with numerous fertility treatments for well over a decade was almost unbearable, and left me hoping her story had a happy ending. It did. In her early 40s, Carolyn eventually gave birth to a much-wanted son. Other women who struggled with fertility, and whose stories feature in the same chapter, were not so fortunate.

What is clear from the stories Haussegger tells is that women occupy a spectrum when it comes to their reproductive capabilities: from the extremes of the militant child-free women who voluntarily sterilised themselves to women who know from a young age that being a mother is a core part of their identity and thrive on having large families. Whatever position women occupy on this spectrum, both their humanity and their rights are not solely defined by their biology. It’s not simply a question of mother versus non-mother, and it’s  shame that Haussegger presents it that way.

What lets this book down, then, is its attempts to connect the stories together into a political analysis. Haussegger makes clear that she’s read several key feminist works, yet she somehow manages to lay ‘the blame’ for all women’s dissatisfactions with their lives at its door. It’s quite astounding that terms like ‘patriarchy’ (or a similar structural term) or even ‘power’ barely rate a mention in the book. Even the notion of assigning blame to someone or something for what, at least in Haussegger's own case, sounds like a particularly cruel twist of fate, seems to stop at the level of the individual and her ‘choices’ (or 'non-choices').

Several of the chapters in the book see either the women she quotes or Haussegger herself blaming ‘other’ women for their problems. A particularly egregious example is provided by one of the child-free women who, in the course of asserting the validity of her own life-choice (fine), took a swipe at all people who care for children on more than a casual basis by saying that all they do is ‘sit around all day’ (and paid parental leave is an 'unfair advantage' that involves 'getting paid to sit around all day' p 239)! Frankly, this is both offensive and wrong, and not exactly a great basis for solidarity around respecting all the subject positions that women occupy.

Rather, the heart of the issue is that a patriarchal system primarily defines all women by their biology - how they look, how sexually available they may or may not be, whether or not they have children - regardless of whatever else they have to offer. That will manifest in different ways depending on what other subject positions an individual woman occupies: some women will be derided for being successful in traditionally male roles and not having children (just this week, yet another extremely offensive and sexist attack on Australian Prime Minister Julia Gillard proves this point), while others will be seen as ‘doing nothing all day’, as well as losing out on any number of economic benefits, because they are stay-at-home mothers. Blaming each other or an abstract spectre called ‘feminism’ for this only serves to leave dominant structures of power intact.

Commentator Leslie Cannold is spot on about the central problem of this book:

While Haussegger is a wonderful raconteur, and demonstrates a clear gift for exploring emotions - her own and, through interview, those of others - she desperately lacks any capacity to think her way out of the complex problems she explores in Wonder Woman.
Despite having read most seminal and popular feminist texts ... she clearly failed to absorb their central and most important message: that the personal is political. Without this understanding, or some structural framework to make sense of her experience and those of other women in terms other than those proffered by liberal individualism, Haussegger lacks the tools to extricate herself from the circular path of self-blame and DIY solutions that have characterised her journey, and to cut a clear path forward for her female readers. (Cannold, The Age)
And it got me thinking about the way she defined the problem too.

‘Having it all’ seems a popular fantasy of the new millennium. In 2012, Anne-Marie Slaughter provocatively opined in The Atlantic that, for women ‘of her demographic’ - ones who have reaped all the apparent advantages from the feminist revolution - ‘having it all’ (i.e. successful career and family) was still not a realistic possibility and young women were being done a disservice to be told that it was.

While elements of both Slaughter’s article and Hausseger’s book resonated with me, I was principally left wondering about this mythical notion of ‘having it all’. This seems like a distortion of feminism to me. ‘Having it all’ sounds much more like the acquisitive language of capitalism - particularly when it is mentioned in the same breath as ‘choices’ - rather than the language of feminism - which has drawn on revolutionary language like ‘emancipation’ and ‘liberation’ or rights-based language such as ‘equality’ (ideally, of the substantive rather than the merely formal kind), or ‘the right to choose’ (i.e. the right to self-determination and bodily autonomy when it comes to reproduction). It also implies that all men ‘have it all’, which is clearly far from the case.

I’m not the only one perplexed about the ‘having it all’ fantasy. Commentator Tressie McMillan Cottom says that Slaughter’s article left her cold because she did not relate to its concerns, whether from the subject position of her race or class, or ideological orientation:

The article seemed to not only take for granted that all women have been told that they should have it all but that all women have–if not intimate–then definitely not adversarial relationships with power .... More often than not, power has worked to undermine my reality and my existence. And I don’t mean that in some fuzzy theoretical sense. I mean that when power, for example, starts talking about reforming welfare it is usually meant to be an act made on people who look like me; people with whom I identify even if I do not share their economic status. (Cottom, The Atlantic)
I too was somewhat bothered by both Slaughter and Hausseger’s analysis which speaks mostly to women in elite positions of power. This is not to downgrade the many challenges that women have faced to access those positions and crack the glass ceiling. Rather it is to note that most working women - and men, for that matter - are not CEOs or star journalists or politicians - they’re people making ends meet or, where they have some choice in the matter, trying to engage in work that matters to them (which may not be of the most well-remunerated kind). An analysis that fails to take account of this - and other realities, as Cottom attest - can only ever be partial and limited.

Unfortunately, especially given her public profile in Australia, Haussegger's book falls into this category.