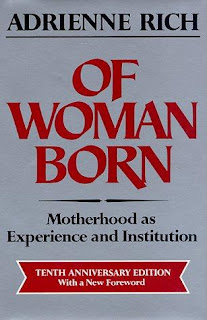 I’m back from my holiday, during which I got the odd quizzical look for immersing myself in feminist poet Adrienne Rich’s Of Woman Born: Motherhood as Experience and Institution (first published in 1976) as my holiday reading material. Instead of dragon tattoos and vampire brides, I read about matriarchal goddess societies, the limits of pyschoanalysis and its focus on the mother-child relationship, and the domestication of motherhood.

The first two topics - the nostalgia for lost matriarchies, in particular - made the book seem quite dated and reminded me of the more cringey side of second-wave feminism. Rich traces the feminist literature published on matriarchies, and I can see the ideological point of them: if patriarchy is historical, it is not simply ‘the natural order of things’; if it has an identifiable beginning, then it can also have an ending. But I find the backward-looking too, well, backward-looking. Do we need the sanction of some mythical past to try and change what is occurring now? To be fair, Rich seems to distance herself from these debates too, but she does engage with them at length.

I was nearly about to give up at the point where she started discussing speculum parties, but two things made me persevere: 1) the urgency of the task and hope for a better future promised by the feminist revolution that informs Rich’s writing and provides the context for her own experiences (which she narrates alongside facts, figures, research, and examples from literature in a self-styled ‘odd-fangled’ approach), and 2) the clear-eyed critique of the ways in which patriarchy has confined women (no pun intended) primarily through their biological capacity to be mothers (whether they are in fact mothers or not).

The version of the book that I read was the tenth-anniversary edition released in 1986 containing a new introduction. In it, Rich reflects on how far women had come, and how much there is still to do, as well as the limits of her earlier analysis (primarily in relation to race and class). Although she draws on her own experience, she makes the important point that telling stories is not enough, saying that the ‘personal is political’ has been overlaid with ‘New-Age blur of the personal-for-its-own sake’ (ii) shifting the focus back onto the individual and her choices rather than remaining on the collective and the political context in which she finds herself.

Throughout the book, Rich does not retreat into the safety of sentimentalism about women. Indeed, she closes the book with a chapter on mothers and violence - not as the victims of violence (although they too often are), but as perpetrators. She concludes that ‘theories of female power and female ascendency must reckon fully with the ambiguities of our being, and with the continuum of our consciousness, the potentialities for both creative and destructive energies in each of us’. She expands the point ten years later to add: ‘Oppression is not the mother of virtue; oppression can warp, undermine, turn us into haters of ourselves. But it can also turn us into realists, who neither hate ourselves nor assume we are merely innocent and unaccountable victims’. (xxvii)

Elsewhere, she discusses the by-now familiar topics - although less so when she was writing (it is I who am working backwards) - of women’s work and the alienation of the labour and birth process. But, again, her arguments tread a slightly different path to more recent writers: she focuses on how historically midwives were both marginalised and their knowledge plundered without credit, at least as much as the effects of the split in obstetric care on modern mothers. Particularly chilling was her account of the results of the new obstetric care: before the importance of antiseptics were known, women giving birth in city hospitals attended by doctors who had treated all manner of patients and/or been dissecting corpses were at high risk of contracting - and dying from - puerperal fever. From the start of the eighteenth century till the end of the nineteenth, this fever was epidemic: according to Rich, in one year in one particular city, every single mother labouring in a hospital died. Other fun facts involve the father and son team who developed the forceps - an innovation for difficult labours in which the mother would otherwise have most likely died in agony, along with the baby. The duo kept them a secret from other practitioners for many years to maximise their fame and profit, while women who could have benefitted from their use died in the thousands. When the secret was finally out, forceps became a routine intervention used to speed up otherwise normal births. In the hands of the patriarchs, it seems, devices that initially help women can also be used to hurt them. The submerged feminist history of obstetrics puts the still ongoing midwife-doctor tensions into perspective: there is still a power relation there despite the increase in female doctors and the (much smaller) number of male midwives and birth attendants.

Moving from history to relationships, Rich then devotes a chapter each to the mother-son and mother-daughter relationship. As the mother of three sons herself, she has much to draw on in the former as she reflects on what it means to effectively ‘work for the army’. Historically, this could mean literally raising sons who would grow up to be cannon fodder or, in a more modern sense, raising sons to be patriarchs. Rich’s aim, of course, is not to do either. Instead, she makes a wish for her sons, in what I think is one of the most powerful passages in the book:

that they should have the courage of women. I mean by this something very concrete and precise: the courage I have seen in women, who, in their public and private lives, both in the interior world of their dreaming, thinking and creating, and the outer world of patriarchy, are taking greater and greater risks, both psychic and physical, in the evolution of a new vision. Sometimes this involves tiny acts of immense courage; sometimes public acts which can cost a woman her job or her life; often it involves moments, or long periods, of thinking the unthinkable, being labelled or feeling crazy; always a loss of traditional securities. Every woman who takes her life in her hands does so knowing that she must expect enormous pain, inflicted from both within and without. I would like my sons not to shrink from this pain, not to settle for the old male defenses, including that of a fatalistic self-hatred. And I would wish them not to do this for me, or for other women, but for themselves, and for the sake of life on the planet Earth. (214-15)

I am not the mother of a son, but I think that this wish also extends to daughters. While she talks of the courage of women in general, she is more expressly talking about the ones ‘who take their lives in their hands’, and surely this kind of woman is made rather than born too.

In the next chapter, she writes as a daughter, rather than as the mother of one. In it, Rich traces the similarities, ambivalences and fears that inflect this relationship, and, in turn, play their part in the ‘tragic, unnecessary rivalry‘ of women. (223) She describes the relationship between mother and daughter as ‘the great, unwritten story’ (225) in which the materials are there for ‘the deepest mutuality and the most painful estrangement’ (226). In attempting to write about it, Rich declares that ‘the nurture of daughters in patriarchy calls for a strong sense of self-nurture in the mother’. (245) Instead of limiting herself to individual responsibility, however, she adds:

The embattled language may seem a little romanticised to twenty-first-century ears, but the sentiment is not. Despite numerous advances for women - gains made by second-wave feminists like Rich - there are still many constraints and barriers that women must face: not least of which is how not to become a second-class citizen and a scapegoat for all manner of social ills once you become a mother.