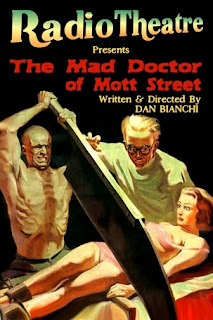 "Last time on ‘Dramatic Birth Stories’, the baby had just arrived, the mother was deeply shocked, and there was a big bloody mess everywhere."

Still reeling, I watched a small squishy blob being taken away from me over to where the paediatrician was poised ready to take her first measurements. My midwife, however, had other ideas and wrestled the baby off him to return her to me post-haste for some post-natal skin-to-skin.

My first thoughts were ‘how will I get the stains out of my clothes?’

Before I really had a chance to respond to her, the blob was off again to be weighed and measured and monitored.

Meanwhile, the registrar told me that I had been torn by the forceps and would need to be stitched up.

I was wheeled off to surgery, midwife in tow, while my husband waited with the baby.

The surgery started well enough. I was awake and conscious throughout, as they decided to use a local anaesthetic that went thought the same place as the epidural. My midwife bounded into the operating room. Perching herself at my shoulder, we chatted inconsequentially to pass the time. Apart from the increasingly insistent tugging, which seemed to be endless (I mean, the area we are talking about is not exactly huge), and the anaesthetist who would not shut up asking me if I was okay all the time, the first hour or so was not too bad. Let me tell you, it is quite surreal to be discussing changes to Cardiff’s main shopping centre with one person, while three other people are trying to sew up your most intimate body parts, and another person is constantly informing you of every little change they are making to your drug levels. ‘Just tell me if you’re in any pain,’ he kept saying. ‘And don’t fall asleep.’

Then the beeping started.

There was a frenzy of activity.

‘What’s going on?’ I wanted to know. The registrars ignored me, as they forcefully started pushing and pulling my abdomen. Someone got on the phone to the consultant, who turned up at some point to inspect and offer advice.

‘Uterus won’t contract,’ was the curt response from someone in the room. ‘We have to massage it to stop the bleeding.’

There may’ve been drugs in my system, but that ‘massage’ hurt.

Then I started shaking uncontrollably, my teeth practically chattering themselves out of my head. ‘Shaking,’ I managed to get out. ‘Can you stop it?’

‘I’m okay with the shaking,’ said the anaesthetist. ‘You’re not in any danger.’

‘But my teeth won’t stop chattering,’ said I, stating the obvious.

Clearly this was a winning argument, as yet another body who had entered the room started drapping inflatable warming cloths around me. I gradually felt warmer, and some of my shaking stopped. But those teeth kept right on going. I’m surprised I have any left.

Meanwhile, the registrars had stopped assaulting my stomach and were finishing their needlework. My midwife had given up on the small talk and was stroking my hair and forehead. The anaesthetist had temporarily stopped badgering me to make incessant phone-calls to the lab to try and figure out whether or not I needed a blood transfusion. After a bit of back and forth, he decided I didn’t.

Eventually, it was all over. About four hours later, I was wheeled out into the recovery room. My husband sat waiting for me, with a small bundle next to him that I couldn’t really see properly. The nurses introduced themselves to me and asked my permission to take some colostrum to feed her. I said ‘yes’ and was squeezed and prodded a little more. I watched them feed the paltry results to her, but still have little recollection of what she looked like. I seemed to have hardly any strength for anything, other than to lie on the gurney and try and focus on what was happening around me.

My midwife asked if it was okay if she went home, so she could get some sleep. Fighting sleep myself, I said it was fine.

Some time later, and my sense of time is very hazy by this point, the registrar and anaesthetist burst back into the recovery room, saying we needed to go back to theatre right away. My vital signs were erratic and I hadn’t stabilised in the way they had hoped. A purple form was shoved in my face asking if they had my permission to perform an emergency hysterectomy in order to save my life.

‘Oh,’ I said, thinking this was starting to get very serious indeed. The doctors looked worried and wanted to move quickly. I signed the form with the small amount of strength I had left.

At this point, my husband intervened. He had been told next to nothing about what was going on, partly because of the state I was in, and partly because of the speed at which things were now starting to unfold. Through it all, he had literally been left holding the baby, and was terrified about what might happen. He asked the doctors if there were any other options. Feeling the urgency of the situation, they quickly hauled him out of the room, and, so I understand, told him that unless they took me back to surgery again, as soon as possible, I could bleed to death. Bleeding from the uterus is apparently very serious, and severe injury and death can result in a matter of minutes.

This all happened out of my earshot, of course. When they came back, he was wiping away tears. I didn’t have any time to say anything to him before I was wheeled off again. This time, they told me en route to the operating room, I would be put under a general anaesthetic.

‘Don’t worry. A lot of people feel like that when they go under,’ they replied. I think this was meant to be comforting.

They put the mask over my face, and then pulled it away again. ‘Nothing’s happening,’ I said. ‘Don’t worry, it will,’ they said, putting it back on.

Before everything fell away, I heard that the consultant was now there, and they were discussing various options to staunch the bleeding.

Obviously, I did wake up again.

By this time, it was mid-morning the next day. Sun was streaming in the window of the birthing room. My husband was asleep in a chair by my bed. I felt a lot better than I had for a little while, although there were a lot of wires coming out of my arms and it hurt to move. I looked around this brave new world, and saw a little bundle with a large angry bruise on her cheek and cuts on her forehead. She was asleep.

It had been nearly twelve hours since I gave birth to her, and I had not held her properly once.

During the morning, both the registrar and anaesthetist from the night before came in to check on me. Not only was I now packed full of stuff to stop me bleeding, but I had had three blood transfusions. ‘But don’t worry,’ the anaesthetist said. ‘This doesn’t mean that the same thing will happen again if you have more children.’ Aside from the fact that the thought of having more children was not really uppermost in my mind at that point, I took from this that my uterus was still intact, if not exactly ready, willing and able.

We stayed in hospital for six more days, but I’ll end my story there.

I’ve tried to relate what happened to me - or as much as I can remember, at least - in as unadorned away as I can, lest I be accused of being ‘overly dramatic’. Even now, it still makes me feel very emotional to think about how serious things got very quickly.

All stories are a series of events that have been selected and put together in a certain way to create a certain effect. Until the last few months, narrating my story has been like a kind of therapy for me: I am incredibly grateful to the people who have listened to it, particularly the first time I told it. Telling it dislodged a lot of painful stuff, and certainly help me work through what, I’m sorry to say, was a very traumatic experience.

Contrary to my new acquaintance’s opinion that women competitively over-dramatise their birth stories to - I dunno - make themselves seem tougher, I think many women tell their stories in order to effect a kind of ‘talking cure’ to help them process the profound things that have happened to them.

As one of the hospital midwives said to me, as I bawled again after briefly telling yet another doctor what had happened to me, ‘it’s the ones who bottle it up that you have to watch.’