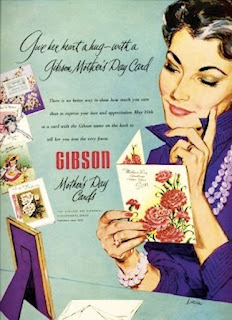 So what are you doing for your mother this Mother’s Day, which is fast approaching on Sunday 13 May?
Watching television last night, I felt slightly nauseated by the sentimental advertising around Mother’s Day - and nearly every advertisement in the programme I was watching (okay, it was the final of Project Runway) was either overtly or covertly targeted at it. A national booksellers chain, for example, sang the praises of ‘mum, the chef’, ‘mum, the chauffeur’, and ‘mum, the peacemaker’ - apparently ‘mum, the brain surgeon’ and ‘mum, the roughneck oil rig worker’ don’t get a look in - before urging us to buy trashy sentimental paperbacks in tribute to her. Frankly, if my child gave me a Lesley Pearce novel as a small token of all the things I do for her every single day, I’d start thinking about adoption.
I’m joking, of course. But this sentimental claptrap was soon followed by something even more insidious.
Next up was an advertisement for a hand-held blender. In it, a model, who looked like a 1950s housewife - blond set hair, full makeup, pearls and elegant clothing - looks thoroughly overjoyed to be holding up a magical, amazing stick blender, which is apparently the answer to her dreams. Call me crazy, but I thought this kind of thing disappeared, well, with the 1950s. Apparently, it’s now okay to revert back to these images, because it’s ironic. After all, we all know that women don’t really go crazy over kitchen appliances, don’t we? And if you don’t think it’s funny and a bit clever, well then you either have no sense of humour or you just don’t get irony.
This kind of thing - ironic sexism, ‘cause that’s what it actually is - sits alongside ironic or hipster racism as the re-emergence of conservative rhetoric that not so long ago was interrogated, criticised and marginalised from public discourse because it was incredibly offensive and demeaning to the group on the receiving end. It also helped normalise the idea that women were lesser human beings. Ironising it may have the effect of offering a mild critical distance for comic effect, but, at the same time, it re-introduces it back into mainstream discourse and renders it acceptable. For the record, I did not find Stick Blender woman amusing, I felt demeaned and a bit depressed.
How’s this for ironic instead?  Mother’s Day - at least the day recognised as Mother’s day in North America, Australia and New Zealand - has its origins in the first wave of feminism. Far from being a sentimental celebration of ‘mum, the hero’ who has few aspirations beyond trashy novels and blending soups, Mother’s Day was a rallying point for women, particularly in the anti-war movement. In 1870, Julia Ward Howe, the famous writer, poet, and suffragist,  made her famous Mother’s Day Proclamation in response to the US Civil War:

Arise, then, women of this day! Arise all women who have hearts, whether your baptism be of water or of tears! Say firmly: ‘We will not have questions decided by irrelevant agencies. Our husbands shall not come to us reeking of carnage for caresses and applause. Our sons shall not be taken from us to unlearn all that we have been able to teach them of charity, mercy, and patience. We women of one country will be too tender to those of another country to allow our sons to be trained to injure theirs.
From the bosom of a devastated Earth a voice goes up with our own. It says ‘Disarm! Disarm!’ The sword of murder is not the balance of justice. Blood does not wipe out dishonor, nor violence indicate possession.
You don’t find that kind of sentiment in Hallmark cards much these days, huh?
Although Ward Howe campaigned for a national mothers’ day and an international women’s peace congress, the day didn’t catch on until 1905 when another woman, Anna Jarvis, who had lost her mother, called for a day where adult children showed gratitude to their mothers. As with so many things, the more palatable option literally won the day. Interestingly, Jarvis’s mother seems to have shared Ward Howe’s vision: she founded Mothers' Day Work Clubs in five cities to improve sanitary and health conditions, as well as feeding, clothing and treating the wounds of both Union and Confederate soldiers with neutrality.
Looking into the political origins of Mothers’ Day got me thinking about what things mothers might want that stretched beyond perfume and breakfast in bed. In the 1970s, feminists in Vancouver, Canada, protested to demand their reproductive rights on Mothers Day, while elsewhere others demanded ‘Wages for Housework’. More recently, Mothers’ Day protests against Wal-Mart, family court corruption and, in the UK on their Mothers’ Day which has a different genealogy, cuts to the NHS. These women know that protesting on Mothers’ Day gives protests an extra moral and emotional heft, a positive side to sentimentalism about mothers.
And, just for fun, let’s not forget the Cleveland branch of WITCH (which awesomely stands for ‘Women’s International Conspiracy From Hell’) who in 1969 handed out flyers saying ‘Bury Mothers’ day’, which read:
Today, one day of the year, America is celebrating Motherhood, in home, church, restaurant ... candy shop ... flower store. The other 364 days she preserves the apple pie of family life and togetherness, and protects the sanctity of the male ego and profit. She lives through her husband and children. She is sacrificed on the altar of reproduction ... she is damned to the dreary world of domesticity by day, and legal rape by night ... She is convinced that happiness and her lost identity can be recovered by buying - more and more and more. (cited in Douglas and Michaels, The Mommy Myth, p 28)
As you can imagine, Hallmark wasn’t exactly knocking down their doors either.
Returning to the present, the campaign Mothers Day Every Day seeks not to ensure that mothers eat their breakfast in bed and have massages every day but that mothers and newborns survive childbirth in good health. Their message is stark:
Childbirth remains the leading killer of young women worldwide taking a woman's life nearly every minute of every day. Almost always, their lives could be saved with access to quality health care. To accelerate progress toward safe pregnancy and healthy childbirth for all, Mothers Day Every Day is raising awareness and calling for greater U.S. leadership to strengthen health systems and increase skilled health workers in communities where women die for lack of care. Mothers play a fundamental role in the physical, social and economic health of their families, communities and nations. Their health before, during and after childbirth is critical to the health and well-being of the child, and to the long-term security and economic stability of their nations and the global community at large.
Speaking as someone who survived childbirth due to high quality health care, I can’t think of a better way to celebrate Mothers’ Day than promoting this campaign.
Although, if you’re asking, I am partial to dark chocolate and red wine.
Posted by Judith Pryor at 4:24 PM