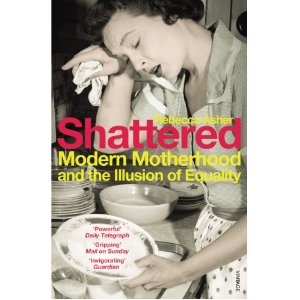 British TV journalist and producer Rebecca Asher seems to be borrowing my shtick: the pithy one-word title and the harried-looking 1950s-style housewife on the cover seem eerily reminiscent of my first few blog-posts. I am not making accusations of plagiarism, however, more pointing out that something's going on. The more books I read for this blog and my own general interest in matters maternal, the more I am convinced that we are in a moment that needs to be seized.
Asher’s target in Shattered: Modern Motherhood and the Illusion of Equality (2012) are the structural inequities between mothers and fathers. The disproportionate sharing of early parenting between women and men, in particular, supported by laws, workplace policies and cultural norms, ensure that women’s gains in the workplace over the past few decades are being eroded on the home-front. Modern mothers are not so much knocking on the glass ceiling as being kneecapped by the Winnie-the-Pooh safety-gate.


Given the lack of balance in parental leave - in the UK, men have access to two weeks’ paid parental leave, women six months’; patchy take-up of flexible working arrangements - women ask for them, men don’t; and the general lag in equal pay - women still routinely earn less then men even for the same positions - mothers, no matter how successful in their pre-child careers, are still overwhelmingly the primary care-givers of their children. And they literally pay for it in lost earnings and lost career advancement: given that women are tending to have children later they can miss out on the crucial career decade in a person’s mid-thirties to mid-forties. Quoting the British figures, Asher states: ‘women may plan to return to the workforce when their children get older but for every year they are out of work their future earning capacity falls by 4 per cent.’ (111)
But it doesn’t have to be this way.

Asher looks to alternative models in Sweden and Norway, Iceland, Germany and the United States (hmm - believe it or not she does find some positives in the only OECD country that has no paid parental leave whatsoever) to draw up a wish-list for contemporary Britain. A key one is ring-fenced paid parental leave (at 80% of earnings and capped for the highest earners) that only fathers can take. Several of the Nordic countries have variations of this. The mother might take the first six-nine months of paid leave, and then the father has to take the next few months, otherwise the family loses the right to that extra leave altogether. This has the effect of creating public early childhood spaces - parks, playgrounds and early learning centres - that are much more populated by men. Asher argues that this early parenting experience is crucial for fathers: what they perceive as ‘natural’ in women, is the result of learning to get over your fears and spend day after day looking after a helpless baby who is totally dependent on you for its care.

Asher doesn’t forget about non-nuclear families either: mothers and fathers who don’t live together could access the leave arrangements, or the ‘fathers’ leave could be transferred to a nominated relative or other carer (say, a grandparent or a same-sex partner).  Where the US provides some leadership is in its gender neutrality in the paltry leave it does offer: leave is not inequitably distributed between men and women, both have access to the pitiful amount available.
Lest you think this all sounds like unattainable nirvana especially in light of the Global Financial Crisis (GFC), Asher has pre-empted some of her critics. For those exclusively breast-feeding, she argues, the first six months would be ‘ring-fenced’ for the mother, then the father would come in. For those who argue that countries simply can’t afford it - as New Zealand’s current government seems to have done - Asher asks whether the lost economic contribution of working women is worth it. Far harder to shift, of course, are cultural norms about who should do the child-rearing. One positive aspect of more men being out of work, or working reduced hours due to the GFC, is that more men are taking a hands-on role in raising their young children.
I enjoyed the policy-focussed aspects of Asher’s book very much: there are clearly working models out there where early childhood care is much more evenly distributed and we should be looking at them. In the New Zealand context, sharing and supporting early childhood care so it is not the sole responsibility of one parent all the time could do wonders for the more alarming of our social statistics.
Where I was less convinced was partly on the attitudinal level. The first part of Asher’s books takes aim at maternity services and how they are currently women-centred. This has the effect, she argues, of marginalising men and making them feel like they are not really part of the birth process. While I took her point about fathers needing to be more involved from the get-go and that paternal health is important in conception and pregnancy too, I couldn’t help feeling that the men she quoted to support her arguments just didn’t like not being the centre of attention for once. Call me a crazy - or conservative, if you like - but till men start actually physically having babies, then keeping childbirth women-centred seems to me to be appropriate and right. Do we really want a return to the days when men called all the shots?  For me, being ‘women-centred’ means that women expect that their partners will be in the room with them (if they want them to be there, that is) rather than smoking outside, and attending classes and preparing for the birth with them too. Perhaps, Asher’s arguments here are more an indictment of the stretched resources of the British health system rather than a philosophical problem with women-centred services per se.
Her comments about systemic impediments to more equally-shared parenting meaning that fathers just weren’t as involved, also made me wonder if the New Zealand experience is a little different. In resorting to anecdote here - and the systemic figures may tell a different story - I am aware of a number of  couples where the father is either the primary care-giver or has alternated periods of leave with the mother, or where fathers have felt comfortable asking for flexible working arrangements - days working at home, or early finishes to do the school-run, for example - to at least assist more actively with day-to-day childcare.
To be honest, I’m not sure what the right answer to all this is. I agreed with what a lot of Asher said, but I also found myself mentally saying ‘yes, but ....’ a lot too.  Which brings me back to my starting point: I am more and more convinced that motherhood should be one of the central issues of contemporary feminism. This is not to downgrade in any way feminist concern with violence, pay equity and reproductive rights. But how can we have pay equity if it’s only practically achievable for women who don’t have children?  How can we access reproductive rights and the right to control our fertility, if we don’t talk about the flipside, the desire of many women to have children (and, let’s not forget, reproductive justice doesn’t mean the same thing for all groups of women)? How can we deal with violence if we don’t also examine familial supports for women and children as well (bearing in mind that a large proportion of physical and sexual abuse takes place in the home)?
Clearly, I’m not the only one asking these questions at the moment. The real question, though, is how best to answer them.
Posted by Judith Pryor at 1:15 AM