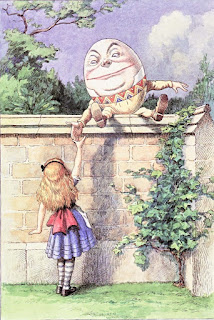 My baby is learning to talk.
Her vocabulary is growing every day, and is now roughly about 60-80 words, with the odd phrase thrown in. Fairly predictably, her first few words related to words and things she has heard a lot about: ‘mummy’, ‘daddy’, ‘birdie’ .... ‘no!’ It’s both funny and slightly depressing that her emphatic ‘nos’ both imitate the frequent injunctions she hears concerning she can and can’t do - ‘no, don’t jump up and down in your high chair’, ‘no, don’t eat that weird thing you found on the ground’ - and signal a sense of burgeoning independence. If you offer her some food she doesn’t want, she’ll say no. If you ask her if she’d like to read a story and she doesn’t want to, she’ll say no. Bartleby the Scrivener has nothing on this girl.
Language - or languages, if a child is fortunate enough to be growing up in a multi-lingual environment - precedes subjectivity. The meanings of words, and the connections between them, exist long before a baby starts moving from babble to recognisable speech and a consciousness of self. And even babble is inflected with language. One of the babies we know has a father who is a native speaker of another language. The baby’s mother told me that he thought the baby’s pre-linguistic sounds were English sounds, not those of his own language.
Even before she can self-consciously articulate herself - and, at the moment, she’s articulating mainly simple nouns - language is speaking her.  She learns words and meanings from those closest to her, who speak a specific language (English) in a specific context (early 21st century New Zealand) that generates specific meanings.
The idea of language speaking her might seem unusual, as it's the opposite of what we'd normally think would happen. So what does it mean?
In Through the Looking Glass, Humpty Dumpty lectures Alice about what words mean in the context of the difference between birthday and un-birthday presents. He says:
‘There are three hundred and sixty-four days when you might get un-birthday presents —'
'Certainly,' said Alice.
'And only one for birthday presents, you know. There's glory for you!'
'I don't know what you mean by "glory",' Alice said.
Humpty Dumpty smiled contemptuously. 'Of course you don't — till I tell you. I meant "there's a nice knock-down argument for you!"'
'But "glory" doesn't mean "a nice knock-down argument",' Alice objected.
'When I use a word,' Humpty Dumpty said, in rather a scornful tone, 'it means just what I choose it to mean — neither more nor less.'
'The question is,' said Alice, 'whether you can make words mean so many different things.'
'The question is,' said Humpty Dumpty, 'which is to be master — that's all.'

Alice and Humpty Dumpty are talking at cross-purposes. Alice is coming from the point of view that meanings are agreed: speakers of a language learn shared meanings in order to communicate with each other. Humpty Dumpty is coming from Planet Humpty when he alone has the power to decide what words mean. As cultural critic Catherine Belsey observes:
Language makes dialogue possible, but only on condition we use it properly, subscribing to the meanings already given in the language that always precedes our familiarity with it. As this exchange demonstrates, there is no such thing as a private language. Humpty Dumpty has to ‘translate’ his before he can communicate with Alice. (Poststructuralism: A Very Short Introduction, p 3)
To learn the ‘correct’ meanings of words is also, however, to affirm the values inscribed in those words. In the case of gendered language, dominant cultural values accrue to the meanings of the words ‘boy’ and ‘girl’, and ‘masculine’ (or ‘boyish’) and ‘feminine’ (or ‘girly’). In order to challenge those values, it becomes necessary to challenge the connections that make the meaning of these words seem natural.
Already, my little girl has been described by others using gendered language, words to which I’m becoming increasingly sensitive as she starts to learn what culture determines that words mean. So far, she is both ‘a tomboy’ and ‘a girly girl’, ‘happy and chatty’ and ‘serious and thoughtful’, ‘independent’ and ‘bossy’.  I’m not particularly bothered by most of these words, although I note that they are gendered - it’s not exactly a compliment to call a little girl ‘serious’, for example.
My pet peeve, however, is ‘bossy’. This is in no way a compliment, and is not a word that tends to be used to describe the behaviour of boys and men. It is, rather, a term that polices the behaviour of girls and women. ‘Bossy’ conventionally means ‘to order others around’ or ‘to be domineering’; in short, to be a like a boss. Now, of course, we all know that being a boss is not particularly becoming to women; women that do becomes bosses are somehow un-feminine: it violates the ‘natural’ patriarchal order if it’s women who are calling the shots. Words are powerful; as Humpty Dumpty acutely observes, ‘the question is which is to be master - that’s all.’
I’ve also noticed that ‘bossy’ can be used even when a girl or women is not particularly domineering at all, but rather determined or independent. So even in conventional usage, people don’t deploy this word for what it means, but rather for censure (however unconsciously).
Boys are not off the hook, either. Arguably the words that police the gender of boys and men are even more censorious than those meant for girls and women. ‘Cissy’, for example, means ‘to have unsuitable feminine qualities’.  Unsuitable, that is, for people who should be suitably masculine i.e. boys and men. ‘Bossy’ can be interpreted as a back-handed compliment, with ‘cissy’ it’s much harder to find the positive.
The good news is that the meanings - and the values that shape them - are not fixed for all time: words acquire new meanings that may supersede their former ones (‘gay’ is one example that springs to mind). Those who are familiar with Through the Looking Glass might well know that one of the meanings of ‘there’s glory for you’ is ‘a nice knock-down argument.’ Linguistic innovation can create new norms.
Not only can words acquire new meanings, but words that were formerly terms of abuse - e.g ‘queer’ - can be re-appropriated by those subject to that abuse. In my view, however, re-appropriation can be a limited strategy: while inverting the abusive meaning, it still relies on the abuse to define one’s self in the first place. I might be able to tell my daughter in the future that someone calling her ‘bossy’ is really saying she’s a smart, strong, independent girl and that’s a good thing.
But I’d rather they said she was a smart, strong, independent girl like they thought it was a good thing.
Posted by Judith Pryor at 7:04 PM